Piotr Petras wins the 2017 International Final for Great Britain!” The Bailliage of Hungary led by Bailli D.l.gu. Iv.n Nov.k had  certainly risen to the challenge of staging a wonderful competition programme “ 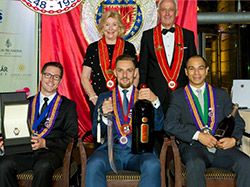 Hungary has a long tradition of winemaking making it an ideal location for hosting a final of the Cha.ne’s prestigious competition.

Hungarian wine has a history dating back to Roman times. After the Ottoman Empire ceded Hungary to Austria in 1699, the influence was felt with the introduction of Germanic grape varieties. That influence was evident in 1730 with the start of the world’s first vineyard classification in Tokaj. Since 1989 there has been renewed interest in traditional varieties and considerable new investment, particularly in Tokaj. Today, Hungarian winemakers use all sorts of exciting, unusual grape varieties to make their wines. 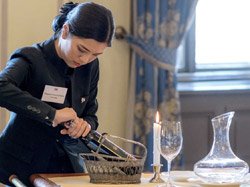 To soak up this history and see first-hand the modern day developments, on the day before the competition the young sommeliers were taken to Tokaj for an educational tour. The programme for the day commenced with a tasting of the wonderful wines produced by Istv.n Szepsy. After visits to Dorgo and Birsalmas vineyards and an informal lunch, a fantastic time was spent at Diszn.kő Estate – part of the AXA Mill.simes group. After such an experience, everyone agreed that Tokaji Asz. is the “Wine of Kings, King of Wines”.*

On Friday, September 29th, competitors, judges and committee gathered at a very early hour at the Academy Club in the exclusive premises of the Hungarian Academy of Sciences situated in the heart of downtown Budapest.

After a photo shoot, the preliminary round of the competition, comprising theory, practical and blind tasting elements, selected the best three competitors who would progress to the Final. There were 14 Bailliages represented: Australia, Finland, Germany, Great Britain, Hungary, Korea, Mexico, Norway, Russia, South Africa, Taiwan, Thailand, Turkey and the USA. Mexico and Thailand were competing for the first time since the International Competition started in 2007. 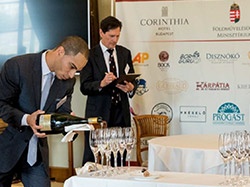 Saturday morning came the announcement by the judges that it would be Australia’s Mikael Grou, Great Britain’s Piotr Pietras and Vincent Morrow from the USA who would participate in the Final which, as is now the custom, was open to members and guests wishing to watch the event.

The tension was perceptible as the three finalists gave of their best in the face of the formidable judging panel. The young competitors were outstanding before an audience totally engrossed in the proceedings.

At the Awards Ceremony during the Bailliage of Hungary’s Grand

Chapitre Gala Evening, the results were announced as follows:

The Bailliage of Hungary led by Bailli D.l.gu. Iv.n Nov.k had certainly risen to the challenge of staging a wonderful competition programme. Bailliage officers, helpers, international and local sponsors, and of course the panel of judges and members of the Competition Committee, all contributed to the success of the event.

Last but not least, thanks are very much due to R.ka F.ldi and Emese Simon for taking the excellent photographs.

*Tokaji was served at the French Royal court at Versailles where it became known as Tokay. Delighted with the precious beverageKing Louis XV of France offered a glass to Madame de Pompadour referring to it as “Vinum Regum, Rex Vinorum” (“Wineof Kings, King of Wines”).