Budapest, September 26-30, 2017
Programme of events around the Final
” excellent organisation, warm hospitality and a fabulous visit to Tokaj “

Tuesday, September 26th saw the “long-haul” competitors arrive in Budapest. Once settled in at the Benczúr Hotel they were greeted at an informal supper by Competition Committee member Klaus Tritschler. 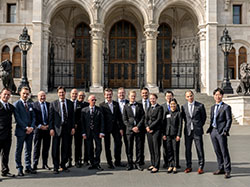 The remainder of the competitors and the judges arrived the following day. The inaugural dinner for the complete group was hosted by the Bock Estate at Bistro “Vendéglő a Kisbíróhoz”. [Ed.See separate article on the estate]

The Bock family’s ancestors have been making wine for nine generations in Hungary’s Villány region (SW Hungary) where they settled in the 18th century. The estate is known for its award-winning reds. Its signature wine “Bock Cuvée” is a blend made from the classic Bordeaux varieties of Cabernet Sauvignon (60%), Cabernet Franc (30%) and Merlot (10%).

With the speeches concluded welcoming everyone to Budapest, the competitors were introduced and briefed on the programme leading to the Final on Friday 29th and Saturday 30th. [Ed. See separate article reporting on the two days of competition]

Despite the convivial evening not finishing until late, it was a very early start on Thursday 28th for what would turn out to be a most memorable all-day excursion to the Tokaj region. 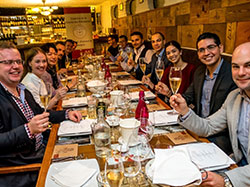 First up was a visit to István Szepsy including a vineyard tour and a wine tasting in his courtyard. The Szepsy family were already producing wines in Tokaj-Hegyalja by the end of the 16th century. István, who is acknowledged to be one of Hungary’s most important winemakers, continues to develop the winery. His wines are amongst the best in the region. This was certainly confirmed by the quality of the delicious examples we had the pleasure of sampling.

Continuing on to Sauska, a family-owned winery with vineyards in both Tokaj and Villány, we sampled the top-class wines made by
their young, talented team.

After an informal lunch, Disznókő was next. The tasting in the winery was yet another highlight of the day. Disznókő is part of
the AXA Millésimes group, which also owns well-known wine estates in Bordeaux, Burgundy and the Douro Valley.

We enjoyed a truly personal welcome at all the wineries. During the course of the day over 30 world-class wines were tasted. This has to have been the best excursion to date during a Jeunes Sommeliers Competition programme.

Dinner back in Budapest at the famous “Vadrózsa Étterem” (Wild Rose Restaurant) was a fitting conclusion to an outstanding day. 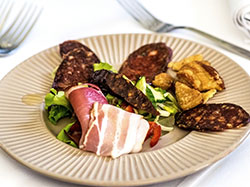 The preliminary rounds of the Final commenced early on Friday morning, dinner that evening was at “Émile Restaurant”. On the Saturday, following the Final held in the morning lunch was much enjoyed at “Budapest Bisztró”. The Gala Dinner of the Grand
Chapitre of the Bailliage of Hungary concluded the programme and everyone set off for home on the Sunday.

In the words of Officier Master Sommelier Brian Julyan, Chair of the Panel of Judges: “I had a most enjoyable time in Budapest, thank you to all concerned for the excellent organization, warm hospitality and a fabulous visit to Tokaj.”

Here, here! Indeed, echoing Brian’s personal impression, on behalf of the Jeunes Sommeliers Competition Committee, I thank
Bailli Délégué Iván Novák and all concerned in making this year such a success.